Coordinates are vital for many aspects of any Revit project. In fact, coordinates are a part of every Revit project, whether you intentionally interact with them or not. In most smaller projects, and even sometimes in bigger projects you may not even worry about coordinates… at least not that you intentionally think about. But there is one area of every project you do interact with coordinates, and that is with Levels. In a Level’s Type Parameters, you have the ability to set the “Elevation Base” to either Project Base point, or Survey point.

So, what does this mean? This will control the datum Revit uses to display the elevation of a Level.

The default location of the Project Base Point is in the same place as Revit’s Origin (or 0,0,0). If you move it, let’s say down in the Z axis, the elevation dimension on the Level will change (assuming of course, the Level’s Elevation Base is set to Project Base Point.)

note: previous to Revit version 2020.2 the functionality was the same, you just had to unclip the Project Base Point before you moved it.

This comes in handy when you need to set the construction datum to something other than 0’-0”. For example, if you want this to read 100’-0”, you simply move the Project Base Point down 100’ and voila!

If you edit the Level’s Type Parameters and change the “Elevation Base” parameter to Survey Point, the Level’s dimension will instead read based on the location of the Survey Point … Maybe!

This is where there is confusion, and you DON’T EVEN REALIZE IT! The truth is the dimension shown on the level is not actually using the Survey Point as its reference. The Level is actually using the current Shared Coordinate! If you move the Survey point (just as you did the Project Base Point), but leave it clipped, you are also moving the Shared Coordinate location, and in this scenario everything seems to be copasetic and working as intended.

This probably doesn’t make a difference in most Revit projects, and you may have never even dealt with this. But you might get frustrated or confused and think something is “broken” if you ever need to set the Levels to read from the “Survey point”, then unclip the survey point and move it to another location.

By the way, the same hold true for the Spot Elevation and Spot Coordinate dimensions! 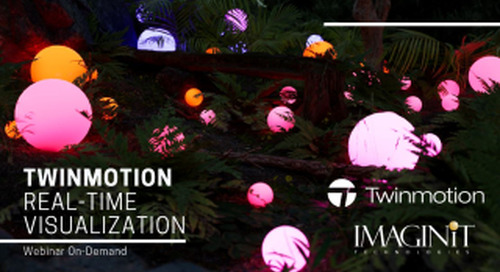 ASSETS & MATERIALS 1. When getting materials from Quixel, where are each of the files you download to be li... 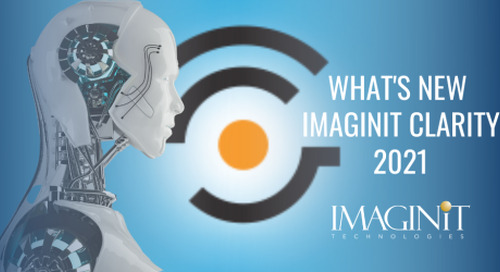 We are excited to announce the release of IMAGINiT Clarity 2021! Clarity is like having a Revit robot; auto... 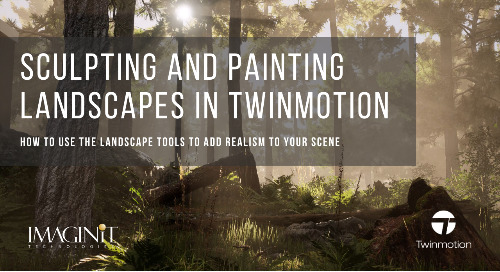 Sculpting and Painting Landscapes in Twinmotion

By: Kenniston Crane, IMAGINiT Technologies Mastering the terrain in Twinmotion is simple and can bring more realism to your project. NOTE: The workflow below does not refer to topography brought... 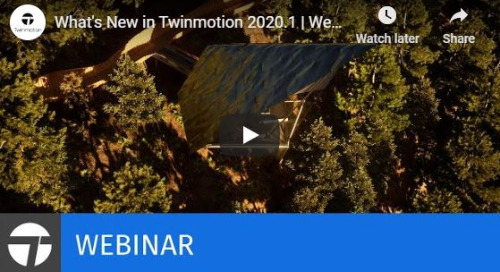 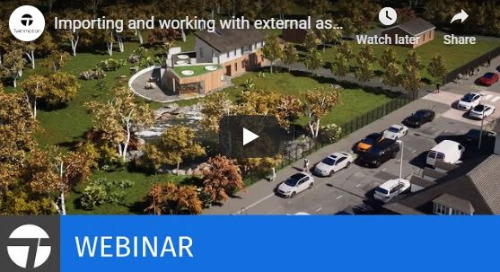 Twinmotion's Technical Evangelist Craig Barr dives into common workflows and provides tips for working with external assets in Twinmotion. He takes you through the requirements and file formats... 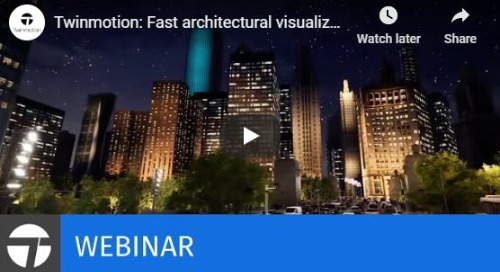 Learn how to take advantage of Twinmotion’s fast, easy workflow for architectural visualization. In this webinar, Daryl Obert from Epic Games introduces Twinmotion and discusses how it fits into a... 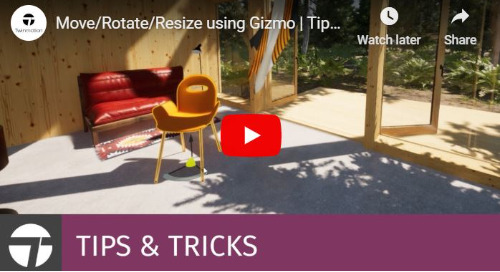 Learn how to use the gizmo in Twinmotion to easily move, rotate, and resize objects in your scene with beginner tips in this tip tutorial. 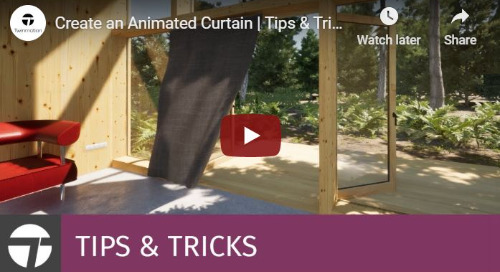 Bring your project to life with curtains blowing in the wind. Watch this tip tutorial to learn how to create an animated curtain using this object from the Twinmotion default library. 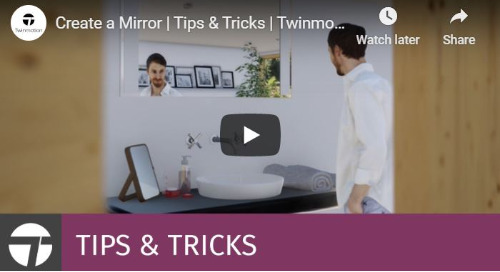 In a real-time application, it can be difficult to render a mirror because of the screen space reflection. In this tip tutorial, learn how to use Reflection Probes and SSR setting to create a... 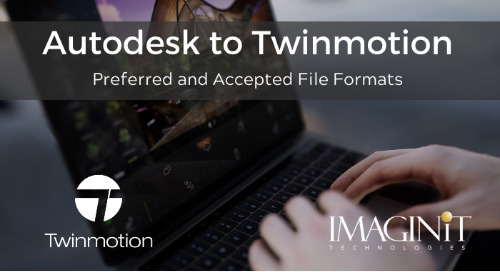 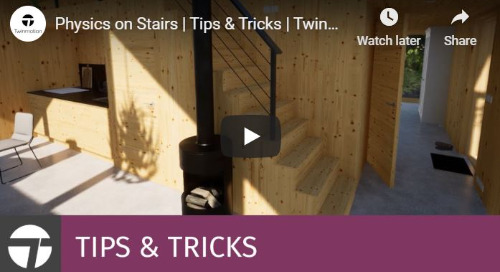 When Physics is enabled, each step on a staircase can make your walkthrough appear "jumpy". Watch this video tip from Twinmotion to learn how to create a smooth transition when climbing stairs in... 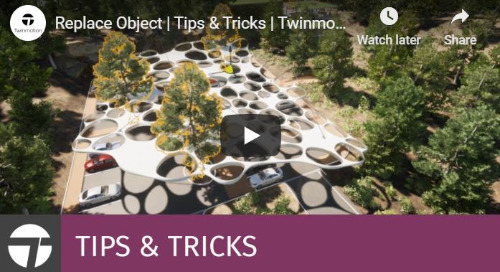 The Replace Object tool in Twinmotion enables you to replace any selected objects by another asset in the Twinmotion library, including objects in the User Library. In this first Tips and Tricks... 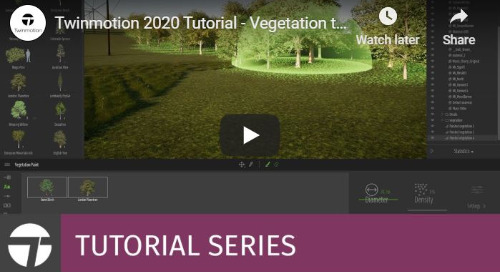 Twinmotion 2020 brings a range of features for generating more lifelike vegetation and propagating it throughout a scene in a more natural way. Plants and trees don't simply scale, they grow! With... 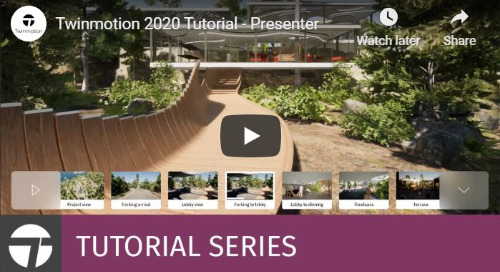 Twinmotion 2020 Presenter lets you share an individual project in a standalone viewer as a lightweight packaged executable. Watch the tutorial to learn how to: create a Presenter project add a... 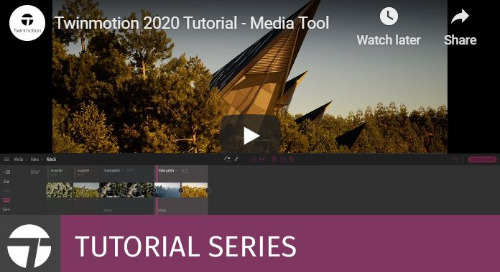 Twinmotion 2020 introduces a new video editing tool with a simpler, cleaner UI that makes it easy to create, edit, and organize clips in a linear storyboard. In this tutorial, you'll learn to:... 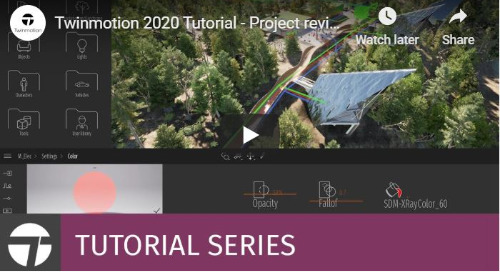 Twinmotion introduces a collection of new tools to help you review your BIM project. Watch the tutorial from Twinmotion to learn about: Xray material Note tool Measure tool Section tool 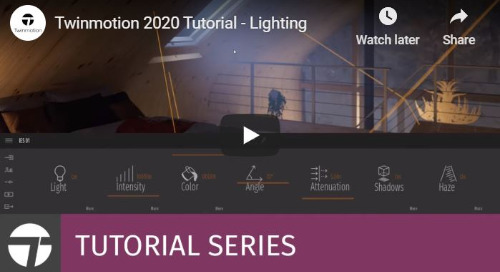 Twinmotion 2020 features an entirely reworked lighting and shadowing system, and rendering options for a higher-quality look of your project. Watch the Lighting tutorial by Twinmotion to learn... 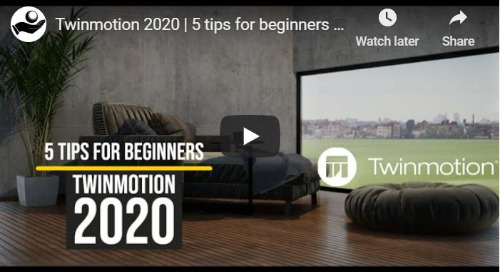 5 Tips for Beginners to Improve Renders in Twinmotion 2020

Are you new to Twinmotion? Do you want to learn how to get the best render quality? If so, check out the video from Twinmotion highlighting 5 tips for beginners to improve render quality in 2020. 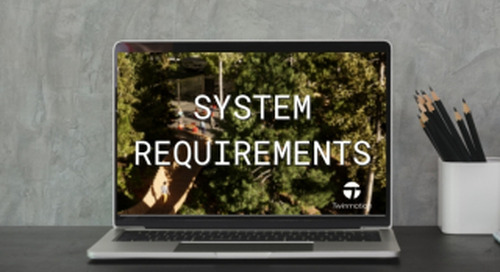 Minimum system requirements are the basic or lowest values, settings, and hardware a software needs to run. However, for a more functional and enjoyable experience, a user should consider the...

(Twinmotion, Epic Games, 2020) What is Twinmotion? Twinmotion is a real-time visualization tool that empowers you to quickly and easily produce high-quality images, panoramas, and standard or 360°...